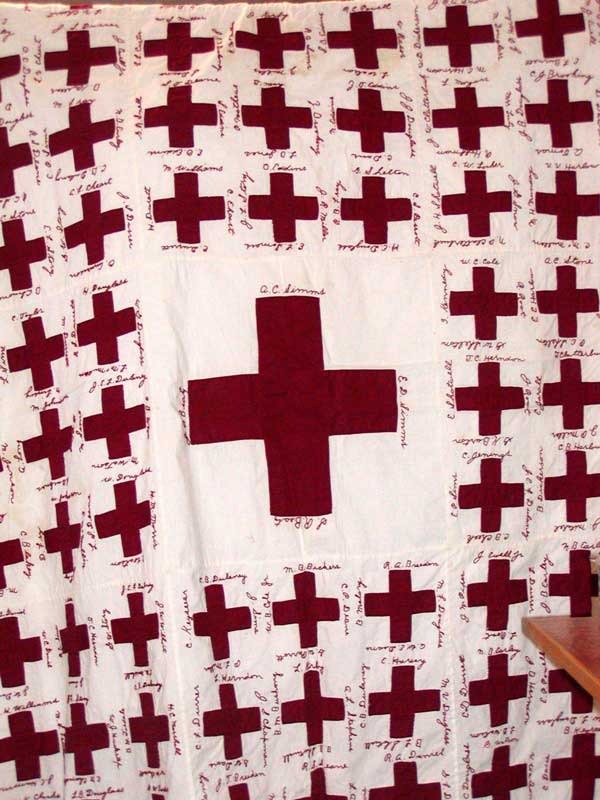 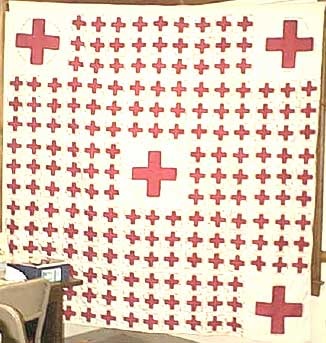 This quilt was made to raise funds for the Red Cross during World War I. An article in the December 1917 issue of ‘Modern Priscilla’ provided a complete pattern and instructions for making such a quilt, down to yardage requirements and costs, cutting instructions and the admonition that “No Red Cross emblem or name can be used in announcements or advertisements of such affairs unless the entire proceeds are to be devoted to the Red Cross. The entire proceeds, not net or half.”

The quilt top (it is not backed or quilted) measures 82 inches square, and is made of turkey red and white cotton, with red cotton embroidery. There are 185 squares, versus 270 on the face of the quilt in the pattern as given – clearly some creative modifications were made locally. Merchants such as Dulaney, Eddins and Simms ‘bought’ the large squares, and most, if not all, of the old County names familiar today are represented. The names were embroidered on the quilt by Sennanie Beatty (born c.1893) of Ruckersville. The article was titled “ONE THOUSAND DOLLARS FOR THE RED CROSS CAN BE RAISED ON A MEMORIAL QUILT,” and shows how this might be achieved by charging from 25 cents per name to $25 or even $50 for larger blocks, but there is no record of what was raised by the Greene County quilt.
In the early 1960s the quilt top was given as a Christmas gift by Miss Beatty to Mr. & Mrs. Waddell Updike of Charlottesville, who donated it to the Greene County Historical Society in 1986. It was documented in the Virginia Quilt Documentation Project in 1989.