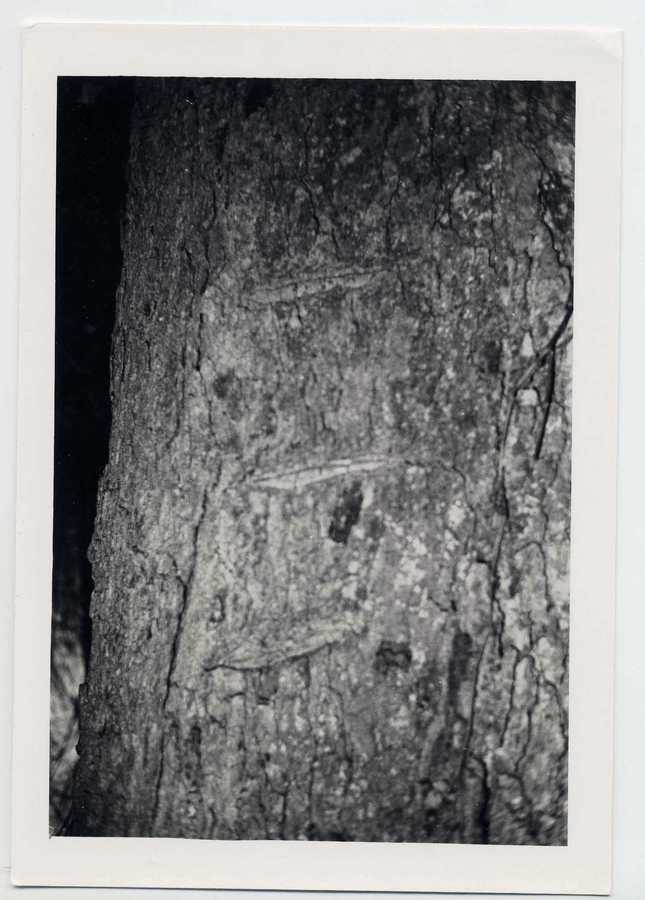 This picture shows a tree with three notches etched in the bark, along Three Chopt Road also known as Three Notched Road. It was an early road built upon an old Native American trail. The road runs through from Richmond, VA, through Louisa and Fluvanna counties, through Charlottesville, and heads into the Blue Ridge Mountains. Route 250 runs roughly the same route as Three Chopt Road, and driving along it, you may notice several roads springing off of it called Three Chopt, which seem to criss-cross Rt. 250 every few miles.

It is believed that the notches represented the three Roman numerals of George III. An early record mentioning Three Notched, or Chopt, Road can be seen in a patent to a Daniel Harris for land on Three Chopt Road in Louisa County in 1756. Accommodations, such as taverns and inns, sprang up along Three Chopt Road, such as Groom’s Tavern (also known as Mocassin Gap Tavern), Parrish’s Tavern, Hackney’s Tavern (later called Hall’s Tavern), Lindsay’s Tavern, and Allegre’s Tavern. Allegre’s Tavern was very well-known and hosted the Marquis de Lafayette in his visit in 1791. It was renamed Lafayette Hill Tavern in his honor.

All rights reserved. Permission to reproduce any part of this item in any form or by any means must be obtained in writing from the Fluvanna County Historical Society.