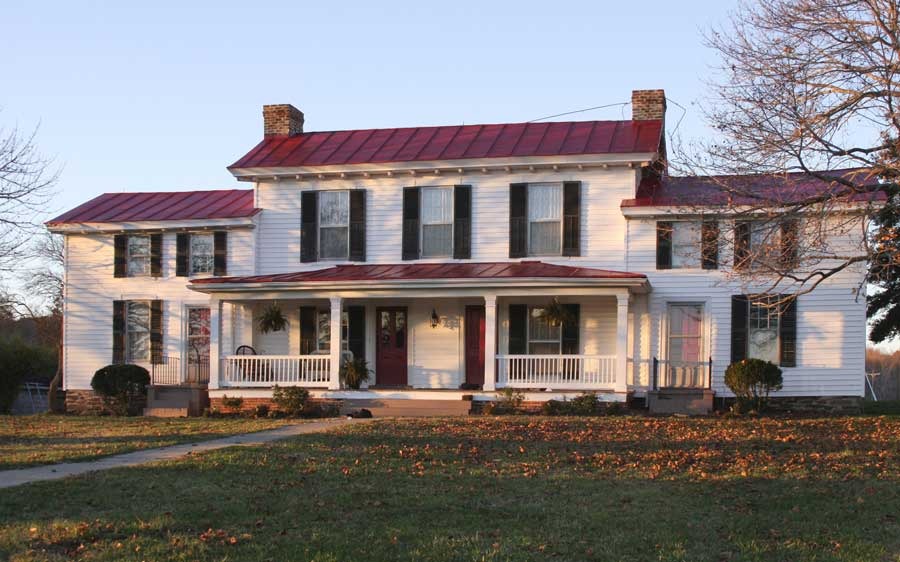 Henry Brown was born about 1815 in Louisa County at a plantation known as “The Hermitage,” located about two miles from Cuckoo (shown in this photo as it appears in 2011). His master, John Barret, was a Revolutionary war veteran and a former mayor of the city of Richmond. In his autobiography, Brown recalls, “Our master was uncommonly kind, (for even a slaveholder may be kind) and as he moved about in his dignity he seemed like a god to us.” Unusual for the time, Brown spent his early years with both of his parents and among his seven siblings. As a boy, he mainly worked in his master’s household but would take breaks to learn about the upkeep of the plantation.

The Hermitage was known to be one of the larger estates in Louisa County and was, for the most part, self-sufficient; it probably cultivated tobacco, wheat, corn, and some cotton. A list recorded in 1832 mentions cows, pigs, and sheep to be raised on the farm as well. Although no records have been found on the location of Henry Brown’s slave house, it is thought to have probably been a log cabin that was about twelve square feet with small gardens attached, allowing the slaves to grow cucumbers, water-melons, cabbage, and other basic crops.

When Brown became a little older, his master allowed him and his brother to carry grain to nearby mills. They would travel by horse, deliver the grain, and wait (often overnight) for the miller to grind the grain. While away, Brown often came in contact with slaves of other plantations and soon learned how Barret treated his slaves more humanely than most plantation owners.

When Brown was about fourteen, his master, nearly eighty years of age, became weak and decided to hire an overseer to be in charge of his forty- seven workers. Brown describes, “[his] disposition was so cruel as to make many of the slaves run away.” The sudden worsening of the treatment of the slaves may have been due to neighbors’ complaints about Barret’s mild nature toward his slaves. In June of 1830, John Barret died and divided his property up among his sons. Barret had expressed emancipation sympathies and Brown’s family members hoped to become free after the death of their owner. Instead, they were surprised and angered when they were not freed and soon forced to be separated. Henry was placed under control of John’s son William Barret who owned a tobacco business in Richmond.

Brown was taken to the Richmond to work there while his mother stayed in Louisa. Brown started a family with a wife who was held as a slave by another owner. When she and his children were sold off, Brown began to plot his escape. Henry “Box” Brown would become famous after shipping himself to Philadelphia and freedom. Read more about Henry “Box” Brown and his work for Abolition atEncyclopedia Virginia

Narrative of the Life of Henry Box Brown Written by Himself