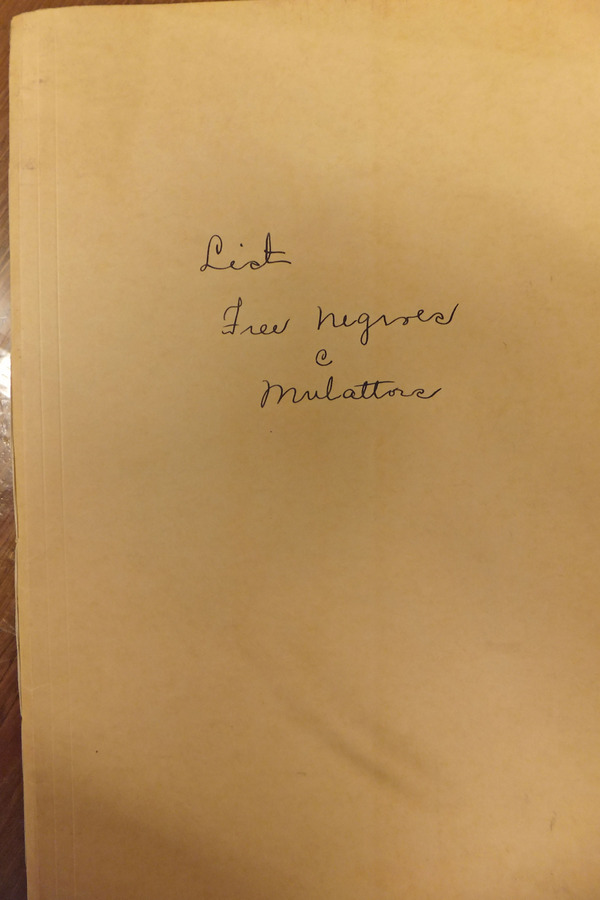 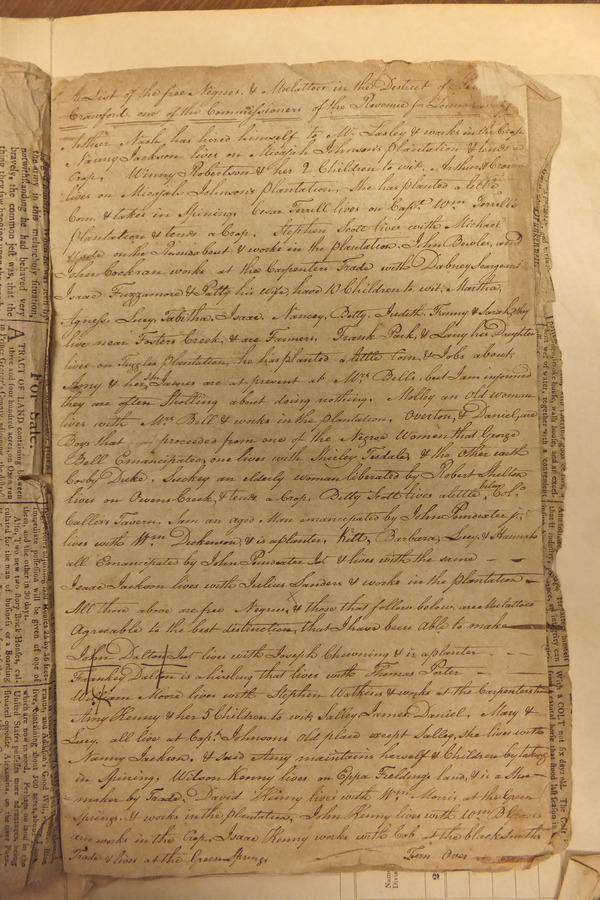 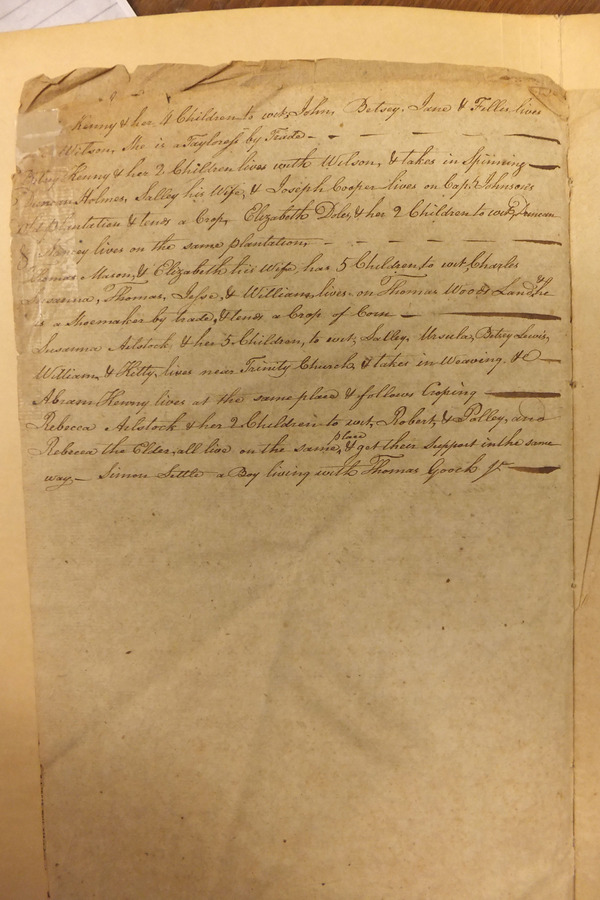 This small booklet is among the 1860 tax records. It contains the names, family relationships, location and occupation of free persons of color on the eve of the Civil War. The list contains many names but does not seem to be comprehensive.

A List of the free Negroes, & Mulattoes in the District of Lo-- Crawford one of the Commissioners of the Revenue for Louisa County--
Arthur Nash has hired himself to W. Lasley & works in the Crop. Nanny Jackson lives on Micajah Johnson's plantation & tends a crop, Winny Robertson & her 9 children to with, Arthur, & Cros lives on Micahah Johnson's plantation, She has planted a little Corn, & takes in Spining, Cesar Terrell lives on Cap.t Wm Terrells plantation & tends a Crop, Stephen Scott lives with Michael Wade on the Roundabout & works in the plantation, John Bowles, and John Cockran works at the Carpenters Trade with Dabney Seargeant, Isaac Fuzzamore & Patty his wife, have 10 children to wit, Martha, Agness, Lucy, Tabitha, Isaac, Nancey, Betty, Judith, Fanny & Sarah, they live near Fosters Creek, & are Farmers, Frank Park, & Lany his daughter lives on Tuggles Plantation, he has planted a little Corn, & Jobs about, Amy & her son James are at present at Mrs Bells, But I am informed they are often strolling about doing nothing, Molley an old woman lives with Mrs Bell & works in the plantation, Overton, & Daniel, are Boys that proceeded from one of the Negroe Women that George Bell emancipated, one lives with Shirley Tisdale, & the other with Cosby Duke, Suckey an elderly woman liberated by Robert Shelton, lives on Owens Creek, & tends a Crop, Betty Scott lives a little below Col.o Callis's Tavern, Sam an aged Man emancipated by John Poindexter jr., lives with Wm Dickenson, & is a planter, Kitt, Barbara, Lucy, & Hannah, all emancipated by John Poindexter Jur, & lives with the same--
All those above are free Negroes, & those that follow below are the lattoes Agreeable to the best distinction that I have been able to make
John Dalton is a hireling that lives with Thomas Porter--
Amy Kenny & her 5 children to wit, Salley, James, Daniel, Mary & Lucy, all live at Cap.t Johnson old place except Salley, she lives with Nanny Jackson, & said Amy maintains herself & children by taking in spining, Wilson Kenny lives on Eppa Fielding's land, & is a shoemaker by Trade, David Kenny lives with Wm Morris at the Green Springs, & works in the plantation, John Kenny lives with Wm B Graves and works in the Crop, Isaac Kenny works with Cob at the blacksmiths trade & lives at the Green Springs

--Kenny & her 4 Children to wit, John, Betsey, Jane & Fellis lives – Witson, She is a Tayloress by Trade--
Betsey Kenny & her 2 Children lives with Wilson, & takes in Spinning--
Duncan Holmes, Salley his wife, & Joseph Cooper lives on Cap.t Johnson's old plantation & tends a Crop, Elizabeth Doles, & her 2 children to wit, Duncan & Nancy lives on the same plantation--
Thomas Mason, & Eliabeth his wife, has 5 children to wit, Charles Susanna, Thomas, Jesse, & William, lives on Thomas Woods Land & he is a shoemaker by trade, & tends a Crop of Corn--
Susanna Ailstock & her 5 children, to wit, Salley, Ursula, Betsey Lewis, William, & Kitty, lives near Trinity Church, & takes in weaving & Abram Kenny lives at the same place & follows Croping –
Rebecca Ailstock & her 2 children to wit, Robert, & Polley, and Rebecca the Elder, all live on the same place & get their support in the same way—Simon Settle a Boy living with Thomas Gooch Jr--