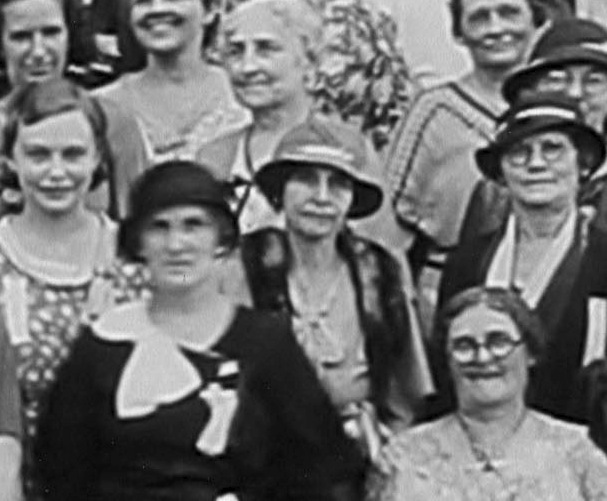 These two images show members of the state WCTU, including Mrs. R. E. Trice, Sr., in the close-up.

Women who felt that alcohol was destroying their families and their society formed the Women’s Christian Temperance Union. It was a prestigious society, as many of the women wanted their membership recognized through the years, though their efforts fell through.

Beginning in 1874, the women began advocating abstinence from alcohol. They would meet in churches, pray, then proceed to march into local saloons asking them to close their doors for good. The movement had its most pronounced effect in Louisa County in the mining town of Mineral. According to the Mineral Historic Foundation records, at one time six saloons stood on the block now occupied by The Church of the Incarnation (Episcopal).  Later records give evidence of a strong Women’s Christian Temperance Union chapter in Louisa County.

Two members stand out from the group, Mrs. Marie Pearl Cox Fisher and Mrs. R. E. Trice, Sr. Marie Cox Fisher’s diary was presented to the Louisa County Historical Society in 2009. Inside its many entries are details from the early to mid twentieth century Louisa. She documented meetings, including where they were held and whom she took with her. Among the names mentioned were:

Aside from the limited level, Louisa sent Mrs. R. E. Trice, Sr., to represent the locals at the state level. To further explain her beliefs, she began writing a column in the newspaper titled “Aunt Patsy.” In this column, she states, “I believe the liquor traffic is the greatest evil extant in the Universe. It rears its subtle, and satanic head in every land and clime, and it never brings happiness, nor prosperity, nor good to any human being. Ruin, poverty, distress, and sorrow come to those who ‘tarry long at the wine,’ and death comes in its wake.” This particular article from August of 1946 continues by saying she “believe[s] that [the] Saviour’s work of redemption was completed upon the cross, but that he meant for [the people] to carry on the work he set in order—to tell the gospel story even unto the uttermost parts of the earth, and do [their] part in ‘destroying the works of the devil.’”

Speaking of the Women’s Christian Temperance Union, “Aunt Patsy” continues by saying, “I believe we can accomplish more if we join hands, and all pull together.”

“I want my children to remember me as standing out unflinchingly, and uncompromisingly against beverage alcohol in its every form. I want them to vision the little white ribbon we wear, as a barrier against the use—and abuse of alcohol.”