The Struggles of Women's Suffrage 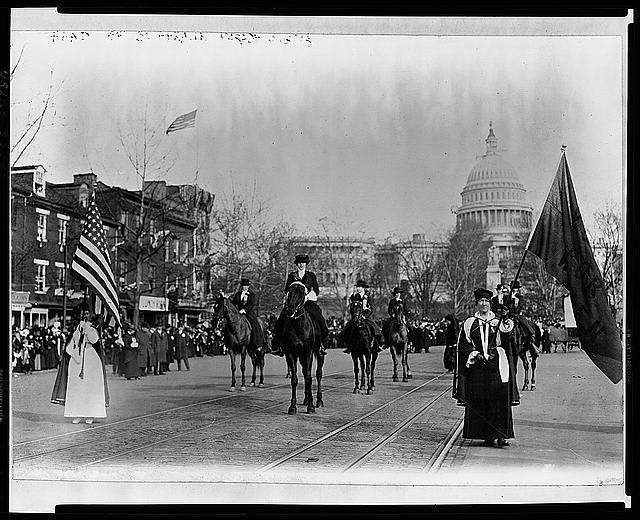 The Struggles of Women's Suffrage

The image attached shows the start of the suffrage parade in Washington, D.C. The year is unknown. Image courtesy of the Library of Congress.

The women’s suffrage movement spread nationwide, though some areas faced harsher conditions and difficulties than others. While Louisa remained calm, various cities dealt with violent outbreaks and punishments.

The fight to ratify the 19th Amendment started long before 1920. Women who felt strongly about equality found many ways to increase the vote. They stood outside of the White House, holding signs and picketing for the chance to voice their opinion. Though these efforts were not violent, the women were jailed for such actions as public disturbance and obstructing traffic.

In prison, these women were brutally beaten; Lucy Burns, one of the suffrage leaders, was beaten then chained to the cell bars above her head and left there through the night, bleeding and barely breathing.

Another woman, Dora Lewis, was thrown into a dark cell, smashed against the iron bed, and knocked out. Other inmates at the prison said to have witnessed the guards beating, choking, dragging, grabbing, kicking, pinching, slamming, and twisting the women.

The Night of Terror unfolded on November 15, 1917, when the warden at the Occoquan Workhouse in Virginia decided the women needed to be punished for even thinking they had the right to vote. Intensifying the mistreatment, the women’s only water now came from an open pail, and their food, already colorless and limited, was now infested with worms.

Alice Paul, another leader, disgusted with the food and treatment, began a hunger strike. As punishment, they strapped her to a chair, a tube was shoved down her throat, and liquid was poured into the tube until she vomited. This continued for weeks until the press got a hold of the story.

To watch more in depth, these women are depicted in HBO’s movie Iron Jawed Angels, as their fight to equality unfolds.

Image courtesy of the Library of Congress

Item subject the Right Policy of the Library of Congress.