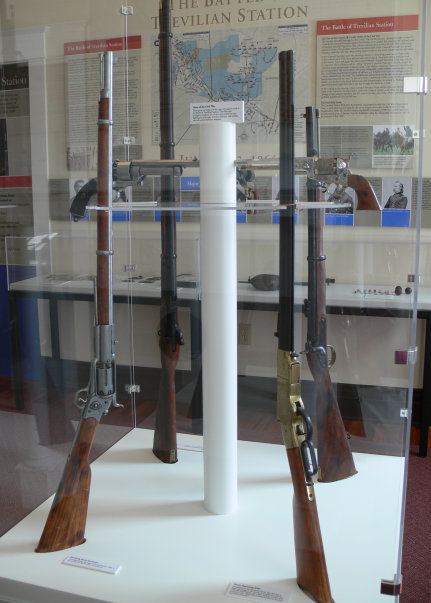 Inside the Louisa County History Museum is a full room of exhibits on the Civil War and the Battle of Trevilians Station.

The Battle of Cold Harbor brought an end to a month of bloody fighting in Virginia. Since the spring 1864 campaign opened, Gen. Ulysses S. Grant had lost upwards of 50,000 men, yet critics pointed out that he was no closer to Richmond than George B. McClellan had been in 1862.  Stymied in his efforts to capture Richmond directly, Grant set his sights on Petersburg instead.  Another Union army, under Gen. David Hunter, had reached Lexington and would soon be crossing the Blue Ridge Mountains toward Charlottesville.  If Grant could capture Petersburg and its railroads and if Hunter could destroy the Virginia Central Railroad and the James River Canal, Richmond would be untenable.

In order to capture Petersburg, Grant had to transfer his army to the south side of the James River in the face of Gen. Robert E. Lee's Confederate army—a perilous undertaking.  To draw off Lee's cavalry and thus blind the Confederate commander as to his intentions, Grant sent Gen. Philip Sheridan and two divisions of cavalry on a diversionary raid toward Charlottesville.  Sheridan had orders to tear up as much of the Virginia Central Railroad as came within his grasp, then push on to Charlottesville and unite with Hunter.  Together, the two men would advance on Richmond from the west, while Grant enveloped the city from the south.

Sheridan left the Army of the Potomac on June 7th and headed west up the North Anna River toward Trevilian Station, a stop on the Virginia Central Railroad. (Since the war, the village’s name has changed to "Trevilians" or "Trevillians.")  He took with him the mounted divisions of Generals Alfred Torbert and David M. Gregg, totaling 9,300 men, 24 guns, and 125 wagons.

Lee sent the cavalry divisions of Generals Wade Hampton's and Fitzhugh Lee in pursuit of Sheridan on June 9th. Hampton had overall command of the 6,400-man force which included 15 guns.  Traveling by a shorter route than that used by Sheridan, Hampton reached the Trevilian area on June 10, one day ahead of the Union column.  Fitz Lee bivouacked at Louisa Court House, a few miles east of Trevilian.  Rather than stand on the defensive, Hampton planned to attack the Federals at their camp, located at Clayton's Store.  Two roads ran from Clayton's Store to the railroad: one struck the railroad at Trevilian Station, the other at Louisa Court House.  Thick woods lay between them.  Hampton took the first road and Lee the second.

Early on June 11th, Hampton engaged portions of Torbert's division and in stubborn, dismounted fighting pushed him back up the Trevilian Station Road toward Clayton's Store. At the same time, Fitz Lee had encountered Gen. George A. Custer's brigade on the Louisa Court House road, a few miles to the east.  Lee fell back after establishing contact with Custer, creating a dangerous gap between himself and Hampton.  Custer exploited this gap and captured Hampton's wagon train, 800 horses, and three caissons parked behind the lines.

When Hampton learned that Custer had gained his rear, he acted decisively, ordering Gen. Thomas Rosser's brigade to attack Custer.  Rosser's swift and powerful charge sent the Union horsemen reeling.  Other Confederate brigades joined the attack, compelling Custer to relinquish his spoils and take up a defensive position east of Trevilian Station.  To the young general, it seemed as though the forces of Hampton and Lee had converged and surrounded him, which indeed they had.  He later wrote that "From the nature of the ground and the character of the attacks that were made upon me our lines very nearly resembled a circle."  To relieve Custer's hard-pressed brigade, Sheridan attacked Hampton, compelling the Confederate general to retreat to a point several miles west of Trevilian Station.  Fitz Lee meanwhile fell back to the east, toward Louisa Court House.

The first day of battle belonged to the Union, but not the second.  During the night of the 11th, Hampton posted his division in an angled line covering the railroad west of Trevilian. The railroad embankment covered his left flank, while open ground in front of his position offered an excellent field of fire.  Fitz Lee joined Hampton by noon the next day, reinforcing his right flank.         Sheridan spent the morning of June 12th destroying some five miles of the railroad track.  Only then did he move out to attack Hampton's strong position west of the station.  Time and again the dismounted Federals charged the Confederate line only to be repulsed.  Federal soldiers took to calling Hampton's position their own "Bloody Angle," in reference to the recent battle at Spotsylvania Court House.  However, Hampton's situation was becoming critical.  His ammunition was nearly exhausted, Union artillery raked portions of his line, and Union sharpshooters picked off officers and enlisted men from the vantage point of a barn situated near the front.  However, the Confederates persevered.  By late afternoon additional ammunition reached the front.  At the same time, Confederate artillery silenced the offending Federal battery and set fire to the barn that housed the annoying sharpshooters.  An attack by Fitzhugh Lee against Sheridan's right flank late in the day brought the battle to a close.

At 10 p.m. Sheridan broke off the fight and returned to the Army of the Potomac, having failed to unite with Hunter or to inflict any permanent damage to the railroad.  Sheridan lost 735 men in the two-day battle; Confederate losses, though not precisely known, probably numbered near 1,000.